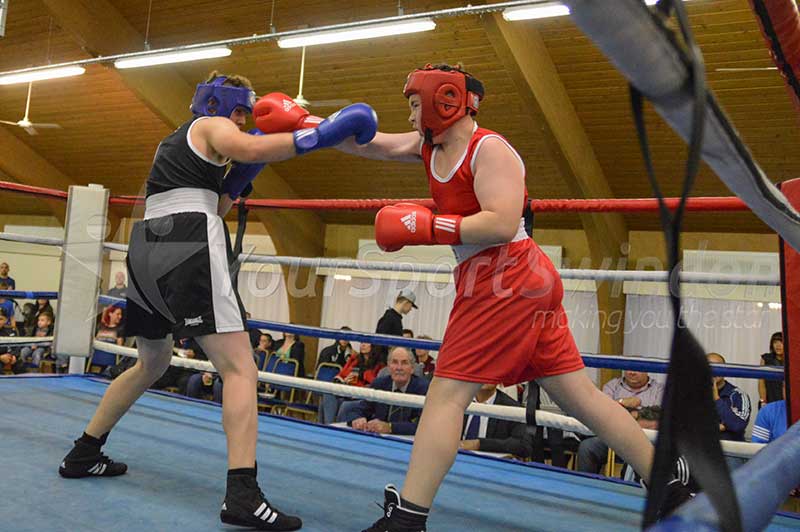 Click on the video above to watch the best bits of this fight.

Walcot ABC’s winter show was a knockout success as the packed crowd at Supermarine Sports and Social Club enjoyed 17 contests.

Sitting ringside were guests of honour Jamie Cox, Ryan Martin and Danny Bharj, three Walcot old boys who are all enjoying a successful career in the paid ranks.

This trio of talent presented Brandon Spillane with the Best Walcot Boxer trophy after a second round stoppage victory over Cheltenham’s Ryvern Masardo.

The 18-year-old Swindonian was making his ring debut but showed no sign of nerves as he set about his larger opponent with fast left jabs and straight rights.

A heavy right led to a standing count for Masardo in the opener, and more of the same in the second round saw the contest stopped in the Walcot boxer’s favour.

Joining Spillane on the winner’s rostrum was 24-year-old Said Salem.

After a spell abroad, Salem had not boxed for 18 months, but he soon shook off the ring rust to enjoy a comfortable points success over the tough Lewis Mulhall of Weston Warriors.

Several of Walcot’s younger boxers appeared unlucky not to have their arm raised by the referee.

Eleven-year-old Sammy Harris appeared to have edged a close battle of the pint-sized terriers with Kai Ademi from Downend ABC in Bristol.

But after three exciting rounds of non-stop action it was Ademi who awarded the majority points decision.

Thirteen-year-old Hunt lost out in a thriller to Callum Charnock from Launceston.

Whilst Luke, who was hoping to celebrate his 14th birthday in style, lost out to old foe Billy Saunders from Ferndown ABC in Dorset.

Thirteen-year-old Hannah O’Brien improved on her previous performances but still lost a close bout with Georgia Watson from the Heath and Reach Club in Bedfordshire.

Fred Bond, 12, showed some flashes of skill but lost a close contest with Jude Moore from Downend ABC.

Fifteen-year-old Ryan Owens lost his rematch Augustin Lakatos from the Empire Boxing Club on points, whilst 14-year-old Adam Copnell found Luke Stanley too strong despite a battling performance from the Walcot youngster.

This quartet all performed with skill and are all prospects for the future.

Walcot Chief Coach Harry Scott summed up the evening by saying: “This has been a very successful show in front of a large crowd.”

“Thanks to Jamie, Ryan and Danny for presenting the trophies, thanks to all our sponsors, especially Vince Gibbs and John McGrath, and to everyone who bought a ticket and cheered the Walcot boxers on.”