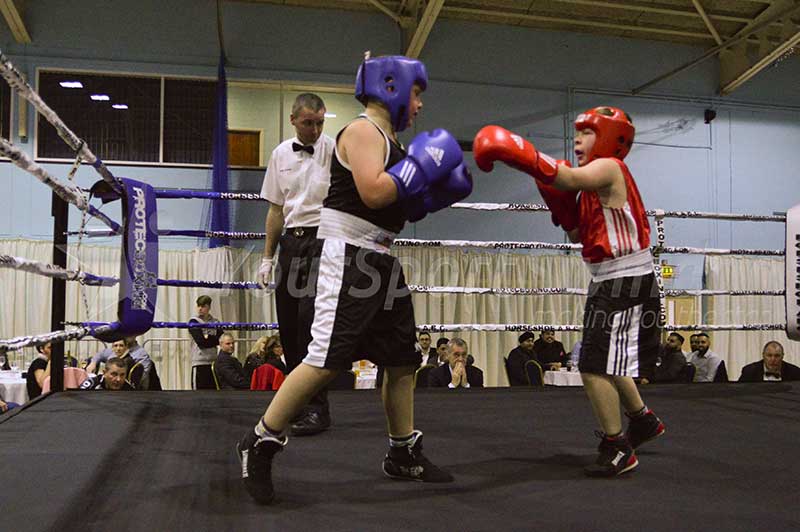 Click on the video above to watch this fight.

Talking to Your Sport Swindon after the show, Piper said: “I have enjoyed myself, the quality of the boxing has been really high.

“I was a little bit worried about that last knockout it was a bit of a heavy knockout but he was well, Bobby (Collard) was well in the end.

“The quality of boxing was really high and the matchmaking was very good tonight.

“I remember (fighting on) dinner shows and being back in the changing rooms really nervous and all you could do was smell roast beef and Yorkshire pudding which didn’t do the nerves any good.

“It brings it back a little bit but I started 42 years ago and I found my first trophy last week actually in my mother’s attic from 1974, it was just before my eighth birthday.

“All the fights were quality fights tonight and I was really impressed with that first skills bout, it was really good boxing.”

The night itself kicked off with three competitive skills bouts.

First up was Walcot ABC’s Kyran Rouse and Shepton Mallet’s Tommy Lee Smith, who both put on a real show for the crowd.

Weston-super-Mare’s Josh Atwell and Shepton Mallett’s Liam Hain were next up and they also produced a competitive bout.

Horseshoe boxer Freddie Woodcock was next up and arrived to the ring to one of the biggest cheers of the night. Woodcock performed brilliantly against Ethan Thorner from Shepton Mallet.

The competitive action began with Cirencester’s talented Jordan Wall and he produced a commanding display of boxing against Luke Liptrot from Kettering as he strolled to a unanimous decision.

Horseshoe’s George White however found himself on the wrong end of the judges’ decision as he somehow lost a majority decision against Berinsfield’s Jordan Blake despite appearing to dominate the fight.

Sam Vallis, also from Horseshoe, battled well before his corner were forced to throw the towel in late in the third round against Ramtin Musah from Beartown.

And finally there was a dramatic end to the evening when Horseshoe’s Bobby Collard was sensationally knocked out by Cheltenham’s Bulawayo in the first round. Fortunately Collard recovered quickly from the knock out and will return to action in the new year.

Horseshoe head coach Brian Roberts was delighted with how the night, which raised around £2,000 for the club, went, saying: “It was a fantastic night of boxing.

“Unfortunately we had a few clubs let us down so we lost a few bouts but the lads that fought really put on a show for the crowd.

“I’d like to thank Nicky Piper for entertaining us and handing out the trophies, all our sponsors, the guests who supported us by buying tickets and of course all the boxers, coaches and helpers on the night.

“Nights like this are vital to help the club survive and we will do another show early in the new year.”