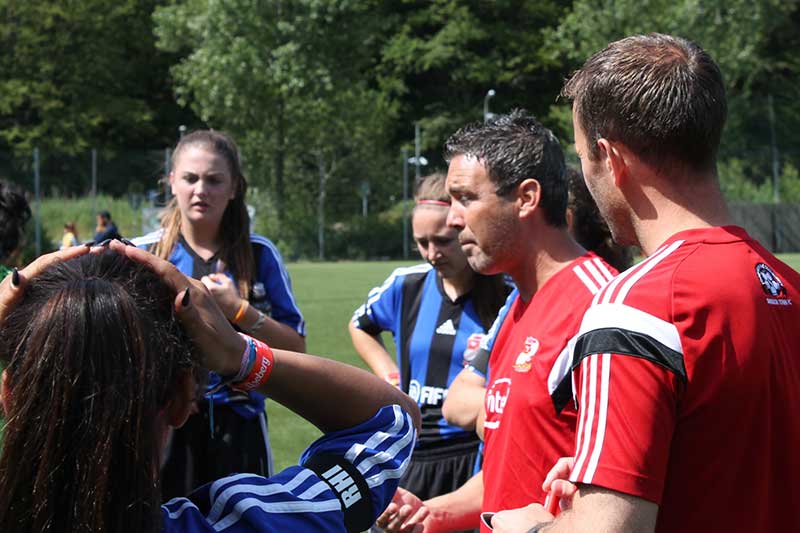 Swindon Town Under 18 Girls boss Shane Hewlett talks to Your Sport Swindon ahead of his side’s Gothia Cup last 16 match against Kungsbacka today.

Town’s girls qualified for the knockout stages of the tournament after winning all three of group games, scoring 12 goals in the process.

Swindon Town Under 18 Girls have been in sensational form so far in the Gothia Cup as they won all three group matches for the first time ever.

Having come from behind to beat AIK FF in their opening group match thanks to goals from Megan Attenborough and Karolayne Byrom, Swindon Town Girls then went on to thrash FC Lyn 7-0.

Attenborough was again on the scoresheet against FC Lyn scoring a three minute hat-trick while Byrom also added two more goals to her tally.

In their final group match, Swindon Town Girls beat Brazilian side BRFC 3-0 thanks to goals from Byrom (2) and Jordan O’Donoghue.

Swindon Town Girls boss Hewlett was optimistic about his side’s chances in their last 16 match but urged them to show extra effort and determination in the match against Kungsbacka.

“The team are all fired up and ready for the knockout stages,” said the Swindon Town Girls boss. “Kungsbacka are one of the best sides that I’ve seen here. They don’t look to have any weaknesses.

“We will have to be at our best to beat them today. We can have the best tactics in the world but really it comes down to a bit of desire, a bit of effort, determination  and a bit of grit and we are going to need all of those in abundance today.

“If our girls perform well then fantastic but we can’t afford for three or four to have an off day otherwise we will be out of the competition.”

Stay logged onto www.yoursportswindon.co.uk for all the latest news, videos and pictures from Swindon Town Under 18 Girls’ Gothia Cup campaign.