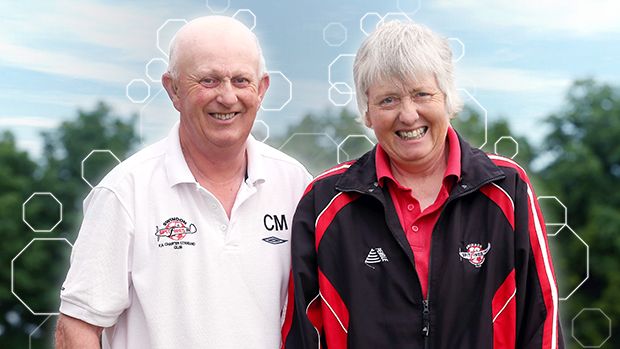 Swindon Spitfires stalwarts Chris and Bev Maul have been shortlisted for the Football Association’s People’s Award.

Husband and wife duo Chris and Bev were shortlisted for the prestigious award which recognises Outstanding Contribution to Community Football after winning the South West Regional Award recently.

The nomination is recognition of the fantastic work both Chris and Bev have carried out for Swindon Spitfires Women’s and Girls’ FC for more than four decades.

Swindon Spitfires is one of the oldest female clubs in the country and it was 69-year-old Chris who was fundamental in the formation of the club back in 1967. The club was also the first women’s and girls’ club in Swindon and the first in Wiltshire to receive the FA Charter Standard Award.

During his time at Spitfires, Chris has held most roles at the club including manager, coach, chairman, coach driver and referee. Today Chris is the club president, groundsman and runs the tea bar on match days.

Bev joined Spitfires in 1970 as a player and, like Chris, has held many roles including coach, manager and club secretary – roles she still holds today since taking them on in 1974.

The Wiltshire FA paid tribute to both Chris and Bev on their website by saying: “Chris and Bev are very special people and are greatly respected by all who know them and not least by the football community.

“What the couple have achieved over the years by their dogged determination is rarely talked about as they are always getting on with what needs to be done today for the clubs tomorrow.

“The couple’s commitment to developing football and in particular the women’s and girls’ game is unquestionable and they have achieved so much.

“Aside from the various roles the couple empower the youngsters who idolise them.

“The couple do not realise how great they are and this award shows how valued and respected they are.”

In addition to receiving a pair of tickets to The FA Community Shield courtesy of McDonald’s at Wembley on August 2nd, 2015, Chris and Bev will also be in attendance to receive the award at the County FA Community Awards Evening later this month.

You can vote for Chris and Bev Maul by clicking on this link: http://bit.ly/1dO58ls