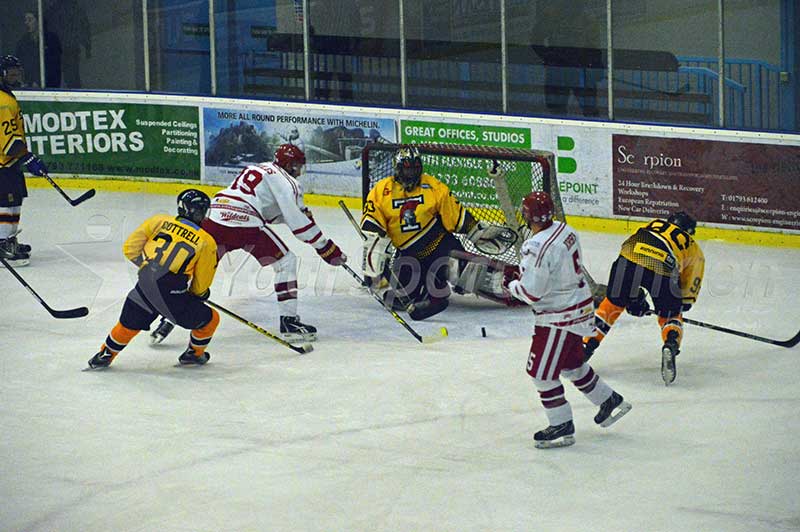 Swindon Sabertooths player-coach Scott Gummerson talks to Your Sport Swindon after his side’s 13-2 win against Telford Spartans at the weekend.

Gummerson was delighted with his side after they bounced back from going two goals behind early on to score 13 unanswered goals.

The Sabertooths are a relatively new outfit who accommodate a various standard of ice hockey players who are interested in playing the sport on a recreational basis.

Having played friendly matches this season, the Swindon Sabertooths will target playing in a league next term.

On Saturday, Swindon Sabertooths knew it would take a good performance to gain victory against Telford – a side who they had both beaten and lost against.

However, the Sabertooths soon found themselves 2-0 down as Telford grabbed two early goals.

Telford’s first was rather fortuitous as a tame shot somehow found its way past Sabertooths netminder Gary King.

The visitors then doubled their advantage courtesy of a long range effort before Sabertooths could reply.

Swindon’s response though was emphatic as they went on a 13-goal streak to close out the match.

Defenceman Peter Pelko got the first when his slapshot found the back of the net.

Andy Webster then drew the scores level with a release in front of net.

With momentum shifting to the home side, two quickly became three as a blind pass across the net was met by forward Cameron Wheeler to give Swindon Sabertooths the lead.

Swindon’s first line then connected, not once but twice, as James Woodhams grabbed the fourth and Ricky Kirby added a fifth shortly after.

Assistant captain Matt Bailes added the sixth with a top corner shot before a period ending goal from defenceman Luke Woodhams would see a 7-1 scoreline to round off the first period.

Woodhams extended Swindon’s lead in the second period before player-coach Scott Gummerson hit the ninth from a rebound.

Bailes sent the Sabertooths into double figures as he hit goal number 10 and added his hat-trick goal soon after.

With Telford’s depleted side tiring in the third period, Alex McIntyre showed quick hands to add the 12th before Woodhams sealed the win with his hat-trick goal.