Swindon Dolphin finish on a high 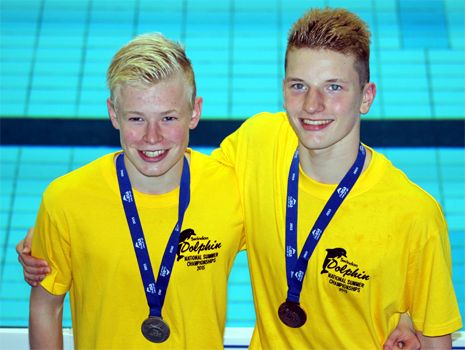 Swindon Dolphin embraced the new British Swimming Home Nations Championships with representation at each of the three competitions in Wales, Scotland and England.

An overall haul of two gold, silver and bronze, one new club record and 10 new age group club records rounded off another successful season for the Milton Road based club.

He had set himself a busy schedule of nine events over six days and this appeared to take its toll with some under-par swims on the final few days.

Durston’s peak performance came earlier in the 400m individual medley where he produced an incredible swim to take a full eight seconds off his own club record set at the same pool just three months earlier.

Meanwhile, 400 miles away in Edinburgh, the Scottish Summer Meet was underway with representation from Swindon Dolphin by Hannah Brown who was competing in the 50m breaststroke.

Brown’s relative inexperience of long course competition and perhaps the pressure of a higher level competition came into play as she recorded a time just over her entry.

The experience however will be invaluable for the future and she will no doubt look to build on her long course competition program.

James Watson had a tough schedule of six events commencing on the second day of the competition with the 200m freestyle.

In the heats, Watson’s enthusiasm clearly got the better of him as he swam the first 50m and 100m in a time faster than the eventual winner of the event.

Despite this, Watson earned a place in the final as well as a new found respect for race pacing.  Having learned from the experience, he swam a vastly improved final finishing in fifth place and setting a new age group club record in 2:02.27.

Watson was joined on the following day by Charlotte Gardo who was competing in the 200m breaststroke.

Gardo’s focus on training in the lead up to the competition meant a new best time was almost inevitable.

Although unable to hold the second 50m pace in the last 100m, it was strong enough to give an overall 2:49.72, almost three seconds under her personal best.

Immediately reporting to the swim-down pool, Gardo clearly had an inkling that a place in the final was likely and later that evening she found herself in the Ponds Forge call room amongst the competition’s top 10 19 and over female 200m breaststrokers. Although not matching the time of her heat swim, Gardo took part in an excellent display of racing that she was clearly delighted with.

Watson’s second swim of the competition was the 200m individual medley in which he was ranked fourth.

Perhaps not relating the experience of the previous day in the 200m freestyle, Watson’s heat swim again saw a far too aggressive start, resulting in a poor last 100m and a disappointing 2:21.33 finish, three seconds slower than his personal best.

It was sufficient however to secure a place in the final, and for the second time in as many days, Watson made an improvement in his race plan, resulting in a new personal best and another age group club record in 2:18.62, finishing in eighth place.

Next to wear Dolphin colours at Ponds Forge were Olivia Flack and Lauren Matthews.

Flack competed in the 200m backstroke and the 50m backstroke, and despite technically good swims was disappointed not to be able to reproduce the form earlier in the year that gave her the age group club record, finishing 15th in the 200m event and 17th in the 50.

Lauren Matthews’ first event of the competition was in the 200m butterfly, her best time in the event having stood since April 2014, a time which she has struggled to get close to this in most of her 13 long course swims since.

The heat swim saw her fall just short of her best mark again with a 2:23.82, although going into the final ranked third, the lure of a medal gave Matthews a much needed boost to go faster still.

An unusual race plan of a less aggressive third 50 seemed to be paying dividends as she turned for the home straight in a strong third place and almost a second up on her heat swim.

Matthews also competed in the 400m individual medley and although the event was not her primary training focus in the lead up to the competition, she still managed to produce a four second personal best and set a new age group club record on her way to the final where she improved on her ranked position to finish fifth.

The same day also saw Watson compete in the 100m breaststroke and although possibly not best suited to the event, he put on a sterling performance to reach the final and finish sixth in a new personal best time of 1:11.41.

Regan Jefferies, competing in the 200m breaststroke was ranked a relatively high seventh although this did not faze the 15-year-old as he made the final with ease in a new personal best time.

Despite getting off to a poor start in the final and being way down the field in the first tranche of the race, Jefferies clawed his way back through the pack maintaining his fourth place at the finish and reducing his personal best time again by a further three seconds, setting a new age group best time in the process.

Davies and Fox along with Watson were competing in the 1500m freestyle, an event that all three had enjoyed varying degrees of success with at the recent South West Regional Championships.

Fox was competing in his first ever national level competition and was possibly overawed by the event as he swam the first 400m faster than the eventual winner and just one second under his own 400m freestyle personal best.

It was however, not a totally unreasonable aspiration as although the remainder of his swim was at a slower pace, it still remained consistent and he will be encouraged by his sixth place finish and a new personal best time.

Davies and Watson were far more controlled overall in their approach although a slightly enthusiastic start by Davies saw him settle down into a steady pace after the first few 100 metres.

Whilst not swimming in the same heat, the subsequent results show that both boys were swimming virtually neck and neck up to about the 1000m mark where it appears Davies just slipped off the pace a few times with Watson maintaining pace and bringing a strong leg kick into play towards the end.

The result was personal bests and new age group club records for both and the first Dolphin medals from Sheffield, with silver going to Watson with his time of 16:55.94 and a delighted William Davies picking up bronze, dipping just under the 17 minute mark with 16:59.84.

Watson took hold of the race from the very start and with a consistent and long stroke never looked like being caught, touching home to take gold in new personal best and age group club record time of 4:13.57.

An eighth place finish in the 50m freestyle final concluded a successful week of racing for Watson and now, along with the rest of the club will be looking forward to what remains of the summer break before returning to training and the start of a new season at the end of August. 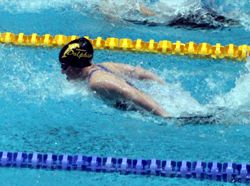 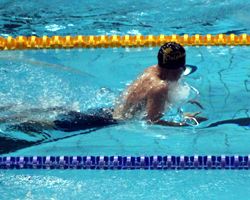 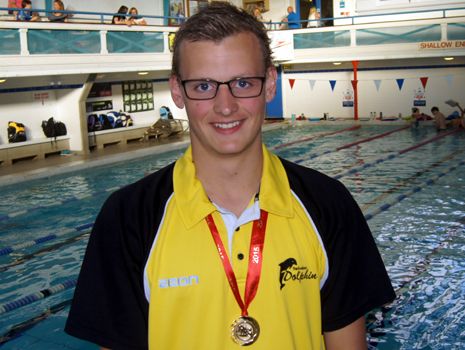