Swindon Dolphin are in the medals 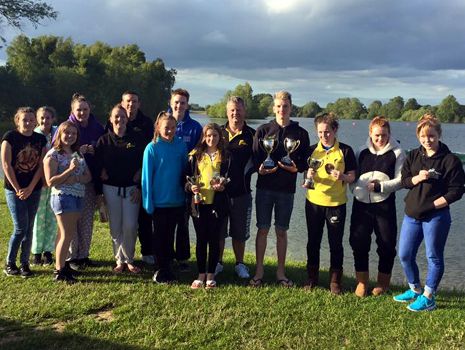 Swindon Dolphin were a force to be reckoned with at the Wiltshire County Open Water event recently.

Swindon Dolphin’s Helen Hanks took gold in the 41 years and over section, also claiming the women’s title, while in the 17-25 years section, Megan Jones took silver.

Dolphin had no swimmers in the 750km event with both girls and boys events being won by Tigersharks.

It was also Kerry Rutherford’s first Wiltshire County Open Water event at the 1.5km distance after moving up to the 12-14 years age group.

In the girl’s 12-14 years age group, Cathy Naus won gold in a time of 20:38.46 with 12-year-old Maya Grounsell finishing in an impressive fourth place.

Lauren Matthews also picked up the gold medal in the 17-25 age group in a time of 20:37.00, with Danielle Lewis winning silver and Melksham’s Jenny Bond picking up the bronze.

Wootton Basset’s Angela Tanner won the 26-40 age group with Dolphin’s Nikki Easen taking gold in the 41 years and over.

In the men’s 1.5k event Dolphin had no competitor in the 12-14 event which was won by Tigersharks’ Marshall Fitchett.

In the 15-16 years age group, it was a Dolphin one-two with William Davies picking up gold and Jake Lewis the silver with Melksham’s Toby Bond wining bronze.

John Cholod won gold in the men’s 41 and over with Dean Fouracre coming home in the bronze medal position.

In the men’s championship William Davis won both the junior and the open championship, with Jake lewis in second and third place going to Tigersharks’ Marshall Fitchett.

The weather was changeable with sun, rain and strong winds, making the sea choppy and unpredictable.

Ronaldo Garcia competed in the very tough 5km event finishing in third place overall and first in his age group in a time of 1:12.42.

Cathy Naus won silver in the 14 years age group, although this was tinged with disappointment with only the winner earning the right to compete at the National Open Water Championships.

Helen Hanks swam the 3k in rough seas in a time of 56.28 picking up the gold medal in her age group and finishing 10th overall.