Swindon Barbell Club in the medals at All England Championships 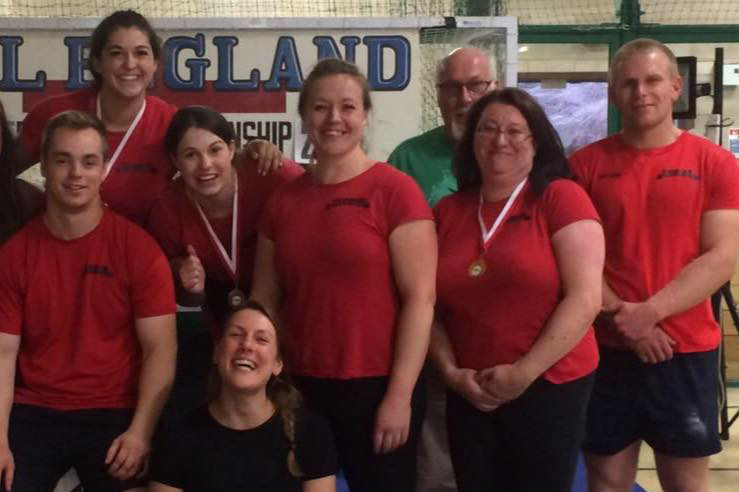 Swindon Barbell Club were in fine form at the All England Powerlifting Championships last weekend as they clinched four gold medals, two silver and a bronze.

Christie Civetta was just one of Swindon Barbell’s stars, claiming gold in the -84kg Equipped Class and notching a national record in the process.

The 25-year-old, who represented Great Britain for the first time back in May at the European Championships, opened her English Championship campaign with a 197.5kg squat – equalling her personal best.

Moving onto the bench press, Christie lifted 112.5kg before adding 2.5kg to her personal best deadlift as she recorded a weight of 177.5kg.

That left Christie with a record-breaking total of 487.5kg and the gold medal.

“Having gone 6/9, it was not my best performance but I am happy with my results.

“I can’t wait for the next competition, and have my sights set on new heights.”

Swindon Barbell Club’s head coach Charlie Shotton-Gale added: “Christie is such an up-and-rising star of GB lifting and so young still, this lady is one to watch for the future.”

Watch Christie in action at the English Championships by clicking on the video below.

White, who was competing in her first national championships and only her fourth ever competitive event, took part in the -72kg class and opened with a personal best squat of 127.5kg.

The 29-year-old then hit a personal best bench press of 65kg before achieving a 155kg deadlift to earn the bronze medal.

“I am so happy to have come third in my first national competition,” said White. “It was a complete surprise as I’d been quite frustrated with some of my lifting having unexpectedly failed my third squat and second deadlift.

“My bench was a really solid lift that I’m so happy with as Charlie and I have worked really hard on technique and it has taken a while to see real gains but finally the hard work is paying off.

“I had a great day and met some lovely and very inspirational people and can’t wait to get back to the gym to prepare for the British classic in September.”

Toms, assistant coach at Swindon Barbell Club, was in action in the Masters event and the 51-year-old grabbed a personal best squat of 150kg.

She then bench pressed 82.5kg and notched 157.5kg in the deadlift, two more personal bests, leaving her a total of 385kg and the gold medal position.

“This was my fourth All England Championship, and my third competition in equipment.  I missed my opening and second attempt squat of 145 kg, but it finally went up on the 3rd attempt, meaning I stayed in the competition, and giving me a 5kg squat personal best.  Next was bench and my first lift of 80 kg went up, but I missed my second attempt of 82.5kg.  It flew up on the third attempt, and gave me another personal best of 7.5kg.

“I’m very happy with the way it went, and will be training hard in the run up to the British Championships in February 2017.”

Also medalling for Swindon Barbell Club was Couty, who grabbed silver in the Senior -63kg class with her lifts totalling 305kg.

Couty, who has been struggling with injuries recently, said: “I know I’m hard on myself, but I want to progress, and was really hoping to at least nail that 52.5 kg bench. After all, that’s what competing is about.

“Main lesson learned is that due to the circumstanced beyond my control, I should have aimed to match my previous records, instead of trying to add to them. A week off deadlifting probably did me good too.”

In the men’s competition, Watson and Makinde competed in the -93kg category -Watson in the equipped class and Makinde in the classic section.

Watson, who was expected to lift in the B flight was moved to the A flight just 10 minutes before the event started.

This meant Watson had to go from warming up at 140kg straight into a competition starting weight of 240kg in just 10 minutes.

He opened with a squat of 240kg before then lifting a personal best 255kg but failed to better that effort on his third attempt.

Watson followed that with a 170kg bench press and then a personal best 227.5kg in the deadlift, securing his second place overall.

Makinde, who has only been powerlifting for a year, achieved a personal best squat of 200kg before bench pressing 137.5kg. He finished with a 235kg deadlift and ninth place overall.

After the event Makinde said: “I thoroughly enjoyed myself and loved every minute and I’m continuing to learn a lot about myself and what it takes to compete in this growing sport.

“The team were fantastic as always and thanks to them, I managed to overcome a nerves along the way to my biggest competition to date.”

Hamilton-Smith, recently back from the World Championships in which he secured a bronze medal in the Masters 1 -66k category, claimed gold in his class thanks to a 162.5kg squat, 110kg bench press and a 215kg deadlift.

“The All England Powerlifting Comp for me was my third competition and my goal mainly was to attempt the 190kg squat and to total 500kgs.

“I’m always quite conservative in my lifts compared to some but feel that I need to finish all nine lifts safe and injury free, as there was only me in my class I thought it would be a good opportunity to go for it a bit more with my numbers.”