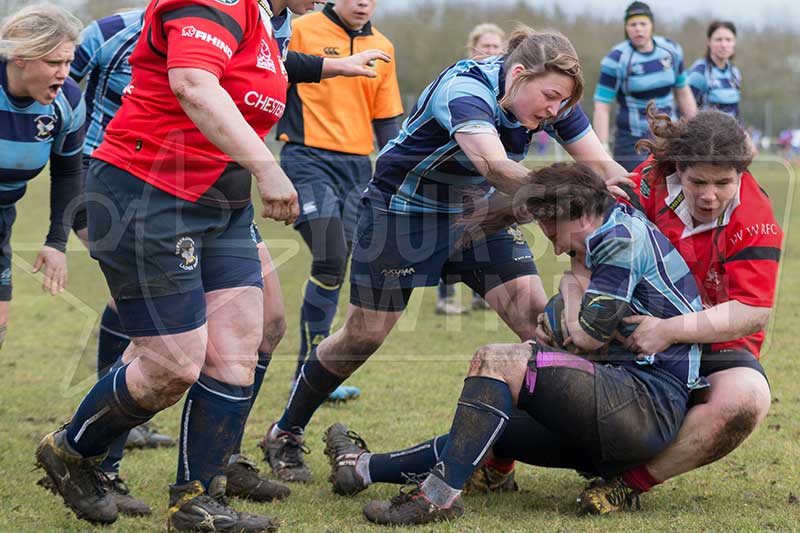 Supermarine Ladies are back on winning form following a comfortable victory over London Welsh Ladies at home in their last league fixture of the season.

Marine started strongly, making good ground and playing in Welsh’s 22 within minutes. A sloppy maul led to the ball being lost forwards and the opposition gained possession. Despite working hard, they were unable to break the Supermarine defence.

The Ladies were dominant in scrums throughout and a particularly strong attempt only 10 minutes in led to a clean passage of play with the ball shipped wide through the hands and a try by full-back Nat Williams.

From the restart, Marine were dominant and again back in the Welsh 22 within a matter of minutes; a strong drive by the pack led to a pick and go by scrum-half Karen Adams for a second try after 20 minutes, converted cleanly by Williams.

The restart led to an early break by number eight Claire Chard. Fearing Marine might have a third successive try on their hands the Welsh defence brought her down. Two quick balls in a row, however, gave flanker Sam Way Gooch an opportunity to cross the whitewash at 24 minutes, again converted.

Already on the back foot, Welsh fought back hard and made good ground but were unable to penetrate the Supermarine defence and couldn’t convert their efforts into points. The Ladies went into the break 19-0 up.

From the kick-off, it was apparent that Welsh had taken the break to regroup and they made an early, fast break down the wing for a try which they converted. The visitors attempted a kicking game to exploit Marine weaknesses but the Ladies’ defence was impenetrable.

A line out led to Marine gaining possession and Captain and fly-half Claire Legg made an exceptional 50 metre break to put the ball down under the posts at 55 minutes. Williams again with the conversion.

The Ladies regained possession quickly from the kick and quick hands, combined with a few strong line breaks from the backs and good supporting play led to another try at 60 minutes by Chard.

Welsh pushed hard at the restart, making good ground again and playing in Marine’s 22. Two penalties in succession led to a scrum and Welsh just managed to drive over the line for their second and final try of the game.

Both sides defended well for the final 10 minutes and the finishing score was a comfortable Marine win of 31-12.

Back of the match went to centre Harriet Marshall and forward of the match to number eight Claire Chard, as well as congratulations to winger Kathryn Barker on her first game for the club.

Match action can be viewed by following the link below: