Stanners at the double for Swindon Supermarine 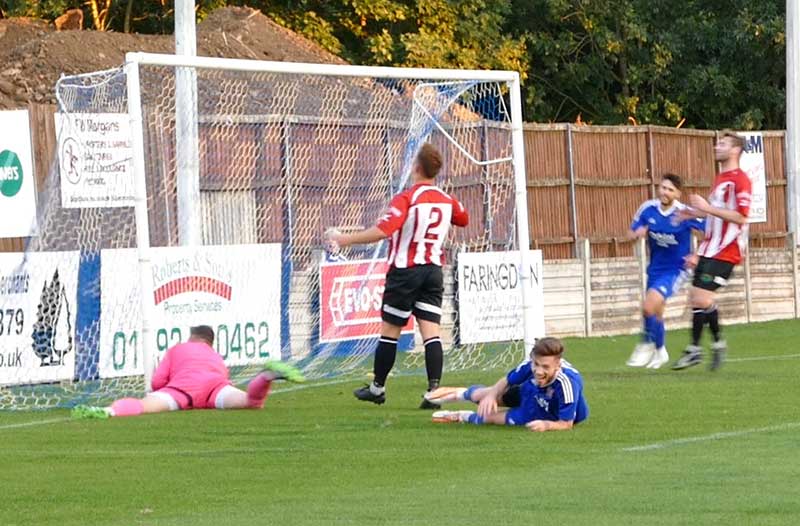 Watch highlights of Swindon Supermarine’s 2-0 win over Shortwood on Tuesday night, filmed for Your Sport Swindon by Craig Punfield.

A goal in each half from Ryan Stanners gave Supermarine a hard-fought win over their Southern League Division One South & West rivals Shortwood.

Having got their season off to a flying start by beating Banbury 3-0 on the opening day, it was Supermarine who started on the front foot when Chris Taylor’s delightful cross just eluded Luke Hopper at the far post.

Shortwood though always looked dangerous on the break and on 11 minutes a neat passing move set James Singh in on goal only for the striker to slice his shot harmlessly wide.

Connor Waldon then went close for Supermarine when he forced a superb save from goalkeeper Tom King after a superb run and cut back by right back Joe Shepherd.

Shepherd then headed a half chance wide of the goal from before Taylor did well to block a Shortwood shot having conceded the original free kick.

A reckless challenge from Hopper on the half hour mark saw him pick up a yellow card before Stanners broke the deadlock on 31 minutes.

Another great run down the right from Shepherd resulted in his cross slipping its way through to Stanners at the far post, who reacted quickest to poke the ball home.

Waldon should have doubled Supermarine’s advantage on 39 minutes when he dragged his shot wide from Hopper’s superb centre.

Shortwood appealed for a penalty towards the end of the half when Stanners challenged Singh inside the area only for the referee to wave play on.

Early into the second half Stanners had a similar penalty shout of his own which was denied by the referee.

Hopper smashed a shot against the post after getting in behind the Shortwood defence and then saw his effort from a free kick on the left palmed away by King.

The crossbar then denied Josh Morse after he latched onto Stanners’ perfectly-timed layoff, his blasted shot crashing against the woodwork with the Shortwood keeper beaten.

Shortwood then had two decent chances to level the scores but fortunately for Supermarine both went agonisingly over Matt Bulman’s crossbar.

And Supermarine took full advantage on 84 minutes when Stanners sealed the points for the home side.

Morse was unlucky not to score once again after his shot was blocked by his own player Hopper. Stanners though was first to react, latching onto the lose ball before sliding his shot underneath King and into the far corner.

Supermarine now host Bishops Cleeve on Saturday (3pm kick-off) when they will look to maintain their 100 per cent record.

Tickets for this match are just £5 for adults, £3 concessions and under 11’s go free.