Stakes are high for Produce finalists 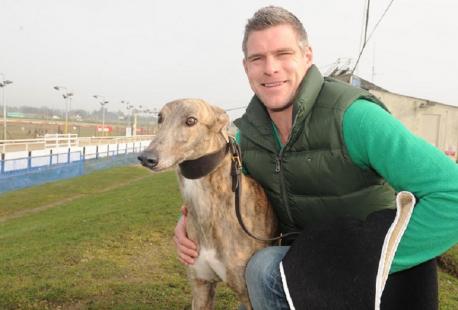 Swindon trainer Matt Dartnall will be hoping to scoop the £15,000 top prize in the British Bred Produce Stakes Final at Blunsdon Stadium tonight.

His runner What Fun Jamie has continued to improve all season and could be a key rival to favourite Romeo Storm, who is unbeaten in the competition so far.

One of two runners for owner-trainer Dave Firmager, who also bred this October 2013 bitch. Fabulous Expert only started her racing career back in February of this year and has really blossomed over the summer, capped by two top-grade victories, at home track Hall Green, prior to setting her sights on this competition. A number of impressive trials here at Swindon, before the opening round, indicated she was likely to be a major player for outright honours and, it’s fair to say, she’s failed to disappoint thus far, with two wins and a runners-up spot in her three runs to date. A strong running greyhound that powers down the back straight, she’s also been known to lead her races and, back on the inside in trap one again, as she was in the semi-finals when when setting the standard for tonight, should be in the mix for what is an ultra competitive decider.

This year’s Produce Stakes is something of a homecoming for Matt Dartnall’s January 2013 home-bred, who started off in graded races here at Swindon a little over 12 months ago. Unsuccessful in three appearances at the time, What Fun Jamie then moved to Towcester, making his debut in an A4 in April of this year before quickly rising through the grades and last appearing in an A1, just under a month before the start of this competition. Two progressive trials back at Swindon indicated he had clearly learnt a lot during his time away but they were bettered in the opening two rounds, where he set the standard with a combination of ferocious early pace and more than enough stamina to score in convincing style. A poor start in his semi-final could have resulted in him not appearing in tonight’s race but he showed a touch of class to qualify and, although he has never run out of trap two here are Swindon, one of his better breaks will make him very tough to beat.

The Second of Dave Firmager’s runners and the only unbeaten greyhound in tonight’s final, having been sent off as favourite in all three of his races and not letting his backers down. Unlike Fabulous Expert, Romeo Storm started his career up at Newcastle, first appearing in an A5 back in December of last year and then signing off with an impressive win in a graded puppy race at the track in April. A move to Dave Firmager from Tom Edgar then resulted in a decent first look at Hall Green before three very smart trials here at Swindon in preparation for the Produce Stakes. With a running style not dissimilar to Fabulous Expert, he can lead or come from behind, his main asset is his middle pace, running from the second to third bends as fast as anything in race. Supporters will have their fingers crossed for a clear passage early on for what has been the most consistent greyhound in this year’s competition.

Arguably the most talented greyhound in the final, it may come as a surprise that Mossvale Ace’s victory in the semi final was his first ever win, anywhere! He started his career at Hove in January of this year and after a number of troubled runs in graded races was upped in class to open company where, again, he was unlucky in running but against much better greyhounds. Beaten by two of tonight’s opponents in the opening rounds, he exacted revenge in the semi final when powering through from last to first to beat What Fun Jamie by half a length. A greyhound that surely looks destined for big six bend competitions, Mossvale Ace is easily the strongest of tonight’s sextet and, granted a clear run, is unlikely be out of the first three, perhaps even powering through again to take command close home.

One of the older runners on show this evening, Klockwork Khaos was first seen at home track Monmore in July last year. As with all of tonight’s talented finalists it didn’t take long before he was running on the open race circuit, taking on a better class of greyhound, before an unfortunate incident at Sheffield in February resulted in a prolonged spell on the sidelines. A couple of trials over tonight’s course and distance in June prepared him for the competition, in which he’s been just a tad unlucky and found just one greyhound too good for him on all three starts. His running style is very much out and gone, and it will be a surprise if Klockwork Khaos isn’t in front as they turn out of the second bend, but he hasn’t quite seen out the demanding 480m trip here at Swindon, so will be vulnerable to all the strong running rivals that will be eagerly in pursuit. That said, his semi final run was an improvement of nearly three lengths on his previous best and his catch me if you can approach, plus the tangible progression he has made here, could just pay off.

A quarter finalist in this year’s derby, Romany Rouge hasn’t quite reproduced some very fast runs at Wimbledon, here at Swindon. Having only contested two graded races at his home track of Peterborough, Romany Rouge then appeared in the BAGS Track Championship competition before embarking on a career in open races and some big competitions, which included reaching the final of the Puppy Derby at Monmore back in March. His running style is not dissimilar to Mossvale Ace, in that he has a lot of stamina, but early crowding has hampered his chances of winning thus far in this year’s Produce Stakes. It could also be said that he hasn’t been suited by Swindon’s relatively short run to the first bend and short run-in but he definitely has a big run in him and a reproduction of anything close to his 28.39 run at Wimbledon, during the derby, will put him bang in contention as they all cross the line.