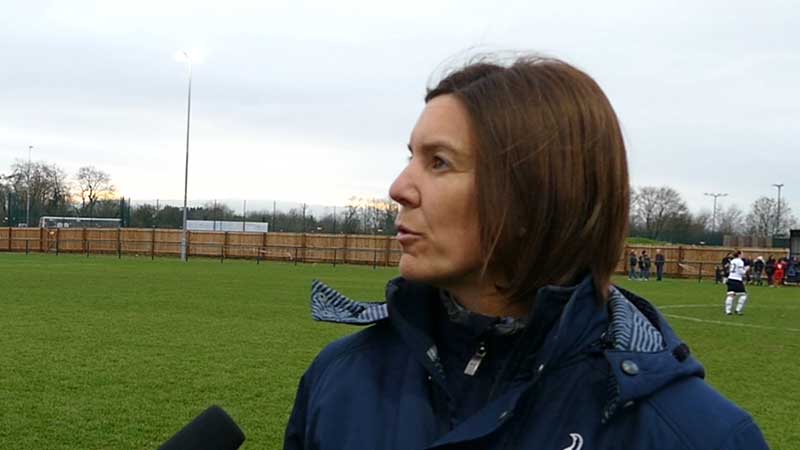 Click on the video above to watch Hills’ interview with Your Sport Swindon.

While the Spurs boss was delighted with her side’s 4-1 win, she hailed the performance of Swindon Town Ladies, saying: “I thought they were fantastic, they have some fantastic players.

“They obviously work hard and credit to them they never threw the towel in.

“They got their goal and if anything in the first half they could have got a couple more.

“They were a really nice opposition and a nice bunch of girls.”

Swindon Town Ladies’ FA Cup dreams were dashed by Tottenham Hotspur as they were beaten 4-1 at Wootton Bassett Football Club.

In what was the third attempt to play the game after two previous postponements, it just wasn’t Town’s day as they found themselves 3-0 down at half-time.

But the early stages of this second round encounter looked promising for Swindon Town Ladies with both Beth Westlake and Michelle Rich going agonisingly close to giving the home side the lead.

Meanwhile, Robyn Levett in the Swindon goal was also called into action early on, pulling off several good saves to keep the scores level.

Early in the second half, Avilla Bergin slipped through the Town defence to finish coolly and make it 4-0.

But Swindon Town Ladies refused to give up and pulled a goal back when Alex Hurst got in behind the Spurs defence scored with a clinical finish.

Despite creating several more good goalscoring opportunities, Town could not breach the Spurs defence again as they bowed out of the FA Cup with a 4-1 defeat.