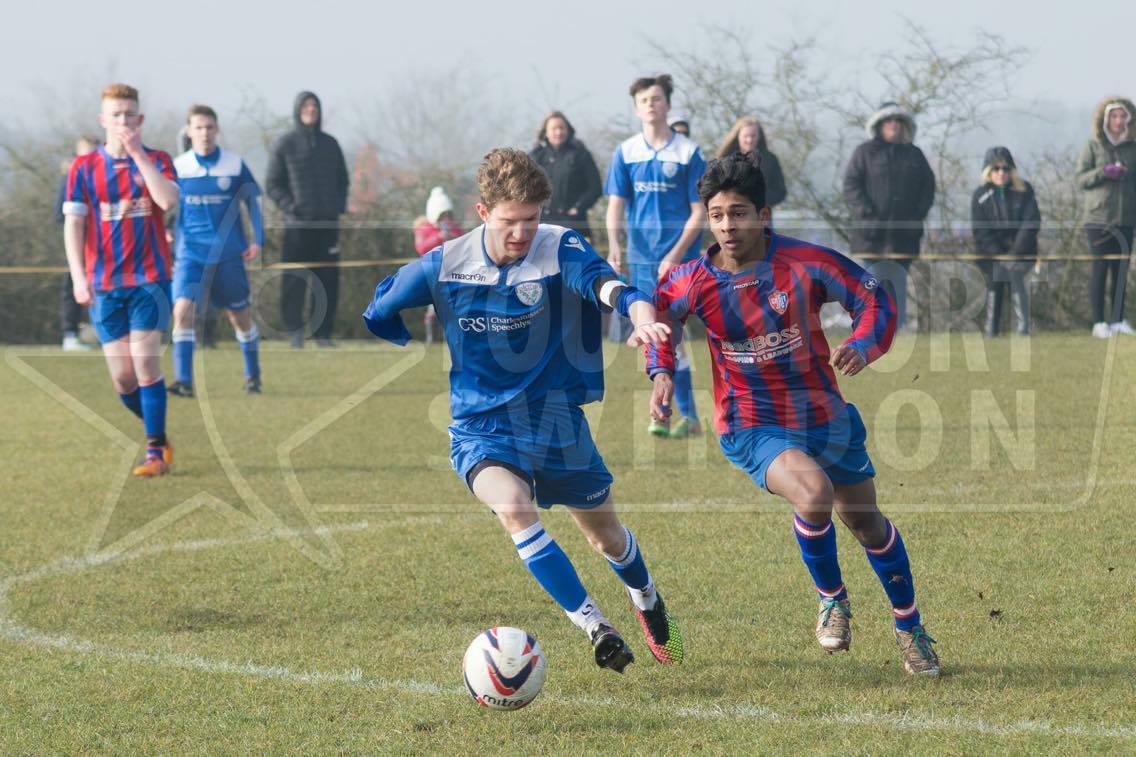 Match reports from all of the games in the North Wilts Youth Football League Cup.

Croft started with intent and went ahead after three minutes through an Ethan Palmer finish.

20 minutes later and the lead was doubled, this time skipper Lewis Hutchison headed home from a corner.

Bassett battled hard but ultimately couldn’t find a way past the Croft defence.

The Royals started strongly and had the better of the early exchanges but Calne were up to the challenge.

The game opened up in the second-half.

FC Calne’s Will Cook fired in a good effort which was well saved by the Royals keeper Ethan Jennings.

Then it was Shrivenham on the attack with Harry Money trying his luck only for Leo Bounds to produce a goal-line clearance for Calne.

With the sides inseparable at full time, extra-time was required.

Only a few minutes into the additional time and the deadlock was broken.

A long through ball gave Will Cook another opportunity, which he duly took.

An exciting finale played out, but Calne hung in to book their place at the County Ground.

Under 13
Croft Junior Red 3 Royal Wootton Bassett Town 1
Croft Junior Red secured their place in the NWYFL Cup Final thanks to a brace from Landon Golding and a brilliant solo effort from Kieran Sutton.

Croft Red started the much better and had a couple of great chances to open the scoring but were denied by some great saves from the Bassett keeper.

Kieran Sutton finally made the breakthrough after some good individual skill and a super strike from 20 yards.

The second-half was much more even with both sides going close before Landon Golding scored his first of the game to double Croft’s lead.

However, Bassett replied quickly to make it 2-1.

Both teams came close to adding to the score before Landon Golding fired an unstoppable drive to make it 3-1 and put the game beyond Bassett.

Wickham Wanderers 0 Liden Community White 7
Wickham Wanderers were unlucky to meet a Liden side in top form, who took the match away from Wickham with a fine second-half performance.
The match was relatively evenin the first-half, with Liden going in at the break two goals up.

Tom Ponting took the match away from the Wickham in the second half, scoring an impressive five goals.

Kieran Northmore contributed with the other two.
Under 14
FC Chippenham U14 Youth 2 – 1 Greenmeadow Youth U14
FC Chippenham started the game strongly and went ahead early on after Clark Luke conected with a right wing cross.

The game settled down and developed into a great end-to-end fixture as Greenmeadow Youth played themselves back into the game.

The second-half started in a similar way to the first with FC Chippenham applying the early pressure.

Greenmeadow were unable to take advantage of a weak FC Chippenham back pass, Rowan Doyle failed to get a shot away.

FC Chippenham’s Tom Wassli was the scorer of their second goal from a corner.

Greenmeadow were quickly back on the attack and shortly after the Referee awarded a penalty to Greenmeadow which Rowan Doyle converted to make the score 2-1.

Both sides continued to have chances but neither could convert them.

Swindon Youth 3 Highworth Town 4
An entertaining matched played out between these two sides, with Swindon Youth unlucky to lose out.

With lots of competitive tackles, Youth looked the more likely and broke the deadlock through Daniel Clare.

Highworth struck back through Jack Paines on 16 minutes, before Connor Robb gave them the lead.

Robb grabbed his second and Highworth’s third just before half-time.

Swindon came out attacking in the second-half and it was Clare again on the scoresheet to make it 3-2.

Just when a comeback was on the cards, Connor Robb went and scored his third which looked to have won the game.

But anything Robb could do, so could Clare as he also grabbed his hat-trick to make the score 4-3.

In the eighth minute Vinnie Granato was on hand to tap in from close range after some great work down the left wing.

10 minutes later Rangers doubled their lead after a great through ball allowed Charlie McCuish to tuck the ball away.

The game at this stage was looking comfortable for Rangers.

Castle Combe kept trying to find a way into the game.

With half-time two minutes away a reckless challenge from Rangers’ Alfie Moulding resulted in a red card for the defender.

The second-half ebbed and flowed with no real chances of note.

Rangers grabbed a third goal to seal the tie in the 80th minute.

Before the match started there was a great show of sportsmanship.

With Supermarine only able to field 10 players, Bassett offered to reduce their outfield to the same number.

On the field the match was a close encounter with chances at a minimum in the first half.

Only minutes remained before half-time when Supermarine had a chance to go into the break with a two-goal advantage after Bassett upended a striker on the edge of the penalty area. The resulting spot kick was wasted however as the relieved Bassett keeper saw the penalty sail over the crossbar to safety.

Bassett hit the bar with a fierce shot from the right edge of box as the second-half got underway and Supermarine were unlucky with a great shot hooked off the line by the last defender.

As Bassett began to pile the pressure on, they had a shot cleared off the line and the keeper made a good save as Supermarine rode their luck.

With 20 mins left, Bassett finally threw on the extra man as they realised that they were in danger of losing the tie.

As the clock ran down, Bassett fired inches wide as their coaches held their heads in frustration.

When the referee blew the whistle at full-time it was Supermarine who booked a place in the final.

The game started quickly for King Stanley who had the most of the early pressure.

Croft dominated the final 25 minutes of the half and were the better team, but were unable to convert any chances.

King Stanley scored an early goal in the second-half with a cross come shot from Danny King that went in off the post from outside the box.

King Stanley continued to dominate most of the second half and a brace from James Glastonbury settled the game.

Royal Wootton Bassett Town 2 Wroughton Youth 6
Wroughton will be back to defend the cup again this year, in a repeat of last years final, defeating Bassett 6-2.

Memories of a a close opening to the game soon faded as the goal frenzy ensued.

Once Wroughton got their noses in front, they looked comfortably in control, despite Bassett registering a couple of goals.

Royal Wootton Bassett Town Blue 4 Ramsbury Juniors 1
An entertaining game of football in which neither side were able to find a way to breakdown the other for the first 30 minutes.

Ramsbury had an early chance at the start of the second half, a free kick on the right but the shot was wide.

Dan Smith then scored his second –  a header from a Cameron McKenzie free kick.

Ramsbury replied, McKenzie played a great ball in behind the Bassett defense for Harry Hoareau to score at the back post.

Royal Wootton Bassett wrapped up the game with another two goals, the first a Ben Gerrish goal, before Dan Smith completed his hat-trick with another header at the back post.

Fairford may have had the better chances but they failed to take them, with only one goal finding its way into Jack Gibson’s net.

Match action from all the games can be found on the Your Sport Swindon website. 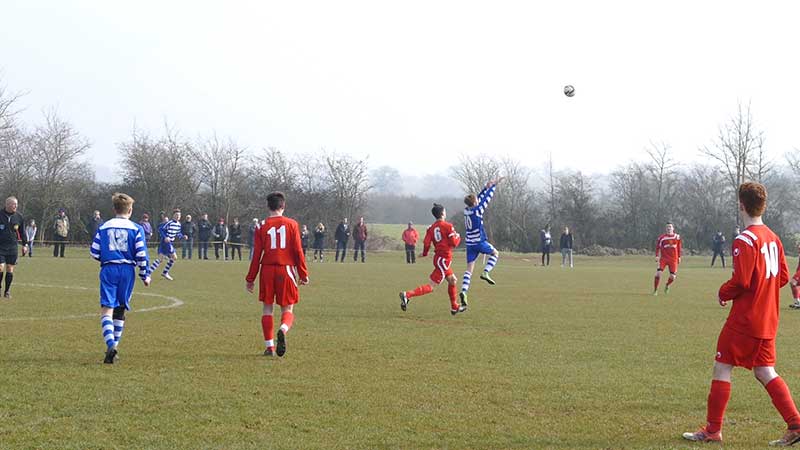