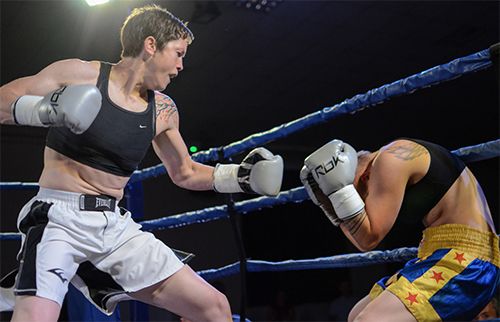 Morgan made her professional debut on Saturday night, beating Klaudia Vigh inside the first round, in a bout sanctioned for six two minute rounds.

Whilst excited about making her debut, Morgan admitted she was disappointed not to be plying her new trade over three minute rounds.

Current rules state that professional female boxers can only box two minute rounds while championship fights are capped at 10 rather than 12 rounds.

Morgan told Your Sport Swindon that the ruling makes no sense to her and does little to promote equality between men and women in sport.

“Being new to the professional boxing world I have been bitterly disappointed to discover, as females, we only box two minute rounds,” Morgan told Your Sport Swindon.

“I see no physical or mental justification for this.

“I had to train for two years to transfer into the Royal Army Physical Training Corps, whom test on a gender free basis.

“The standards are the same for male and female soldiers.

“I wouldn’t have changed that for the world because once transferred I could hold my head high amongst my male peers – why not the same in sport?

“Why are women not playing five sets at Wimbledon or teeing off in line with male golfers?

“If we want to be paid the same we should compete the same. I want to strive for equality inside and outside of the ring.”

Due to a lack of female boxers in this country, Morgan is forced to spar against men and over three minute rounds – another reason why the 35-year-old is so passionate about changing the current rules.

“I have absolutely no problem sparring with men over three minutes and I would like the opportunity to compete against females within the same physical parameters as male professional boxers.

“It would be interesting to know the scientific justification for a two minute round!

“I urge a rule change as soon as possible in the interest of sporting equality.”

The Swindon super middleweight also hopes her arrival onto the professional boxing scene will encourage more women to take up boxing, adding: “I really hope that other women and girls feel inspired by the spectacle of professional female sport. Go dust off a set of boxing gloves and take to the gym – who knows where it will take you.

“I’m so inspired by “This Girl Can” campaign from Sport England, it is a touch of genius.

“If we can do anything to push women’s sport, whoever we are then let’s do this.

“There are so many inequalities from the top end to the bottom end and we are geting there but there is just no reason on this planet why there should be these big gaps. It’s time for us all to step up.”