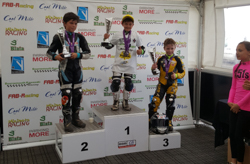 The nine-year-old, riding in his rookie year on a Metrakit 50, has been progressing steadily all season but last weekend at Lydd in Kent was his best yet.

Stainer was fastest in practice for his class on Friday and then grabbed third place on the grid after qualifying.

In his first race Stainer was hot on the heels of the leader as he made his move on the last bend of the first lap.

Stainer’s gamble paid off as he took the lead and then held onto it until the chequered flag for his first-ever championship race win.

The youngster then grabbed second place in race two despite the setback of his knee rubber clipping the curb and coming off during the race.

Race three saw Stainer in the leading pack again and despite almost taking another race victory, he had to settle for second place.

His performance also saw him win the overall race meeting, another great achievement for the youngster.

“I’m delighted with my performance, to have won my first championship race and to win the overall meeting,” said Stainer.

“I had a good Friday practice where I was quickest in my class.

“Qualifying then went really well and I was pleased to be in third on the grid.

“I made a good start in race one, got up to second and right on the back of the leader.

“Then, going into the last corner of the first lap, I decided to have a go for the lead and it paid off.

“I made a good start to the second race and tried very hard in the early laps to take the lead but I just couldn’t quite do it.

“Then half-way through the race my knee slider hit a curb and fell off so I had to adjust my riding style and lost time on the leader.

“I had to settle for second place but I was happy with that in the circumstances.

“Race three was my most exciting race of the weekend.

“I made a good start and got up to the third place. I then stuck with the leader on the first lap but then lost ground.

“On the last lap I made a move and managed to get second place which meant I won the overall meeting, my first-ever one.” 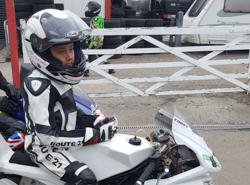