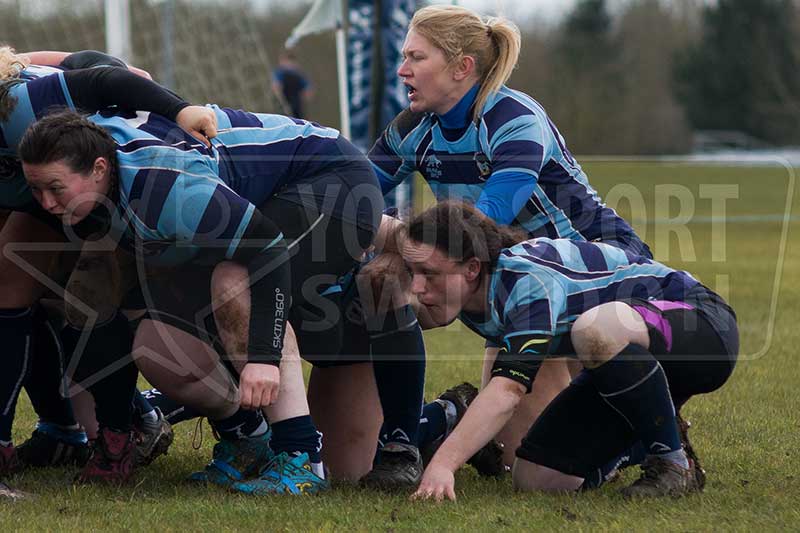 Supermarine Ladies are on course to retain the Intermediate Plate after booking their place in the final of the competition last weekend.

A 29-12 victory against Romford & Gidea Park Ladies on Sunday, saw them set-up a final clash against Darlington next month.

Supermarine didn’t have it all their own way however in this semi-final clash, with Romford taking an early lead.

Despite making a good start to the match, a number of knock-ons and poor handling cost Supermarine dear as Romford scored a converted try on 10 minutes.

Matters worsened for Supermarine just minutes later when Romford passed the ball out wide to score their second try and secure an early 12-0 advantage.

This second try seemed to wake Supermarine up and they started to force Romford into making a number of errors.

With Romford lying on the wrong side of the ruck, Supermarine won a penalty and thanks to some quick hands switched the ball to Claire Chard to score their first try.

From the restart Romford were close to making another break towards the line until Tara Godby thwarted the attack thanks to an impressive turn of speed to regain possession.

The second-half was a different story for Supermarine as they played with renewed vigour and consistency.

Aileen Douglas added a third try on 46 minutes as Supermarine crept into the lead for the first time in the match.

Supermarine extended their lead on the hour when Jenny Benton crossed the whitewash after a series of swift offloads with Williams converting the try.

Romford continued to fight back with their fierce counter attack and fine kicking game, but the Supermarine defence stood firm.

And Supermarine clinched victory thanks to some quick hands from Williams and Chard which saw the ball shipped wide to Benton to score.

The final of the competition will take place at Lichfield on April 23rd.

PrevPreviousRobins boss relishing chance to “get stuck in” against Poole
NextMorris: “We’re a team of battlers”Next