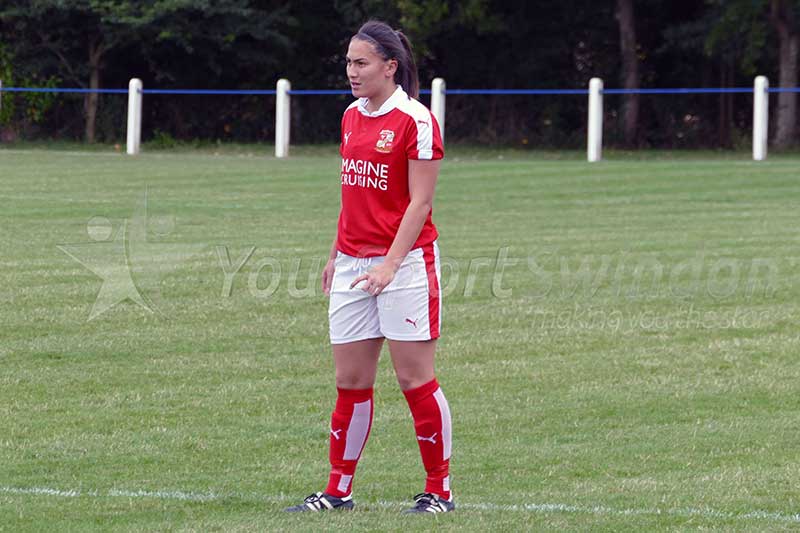 Click on the video below to watch this strike.

Swindon Town Ladies manager Steve Robertson hailed his side’s tenacity and resilience in the wake of their 1-0 home win against Chichester City on Sunday.

The win lifted Town to joint second, with Chichester, in the Women’s Premier League South West Division One table and also closed the gap on leaders Larkhall to eight points with four games in hand.

Swindon nudged themselves ahead midway through the first-half courtesy of Alex Hurst’s well-taken penalty, while Michelle Rich rattled the crossbar.

But Chichester emerged much the stronger side after the break and dominated proceedings, although clear-cut chances were few and far between at either end.

Swindon were forced to defend for their lives in the closing stages and had to soak up plenty of pressure, but were able to hold on to keep them firmly in the hunt for silverware.

Having now taken four points against Chichester this season, Robertson was delighted to see his charges perform the ugly side of the game when it really mattered.

“I’m really happy. Chichester are probably one of the favourites going for the league and we have taken four points off them over the season,” he told Your Sport Swindon.

“I spoke a while back about how important it is, if you are going to push for a promotion, beating all the other teams twice and the big games tend to sort themselves out.

“Taking four points off a team that is pushing for promotion as well is only a good thing, so it is important we maintain that standard and take that into the other teams as well because there are no teams in our league that you can really take for granted.

“It is great beating the big ones but you’ve got to take all the other teams out as well and you’ve got to beat them twice in a year, so hopefully we can do that.

“Today showed the resilience of the squad and we’re really good at digging in the last 10 or 15 minutes.

“We’re not often in a position where we have to ride that storm in the last 10 or 15, but the last two games we have been and it’s really impressive for me to stand on the side and see how committed the girls are.

“We spoke to them at the end about how good it is to see people throwing their bodies in the way of things and making sure that they keep a clean sheet and get the points.

“We had a chat at half-time as well and said that if we don’t concede a goal in the second-half then that is our job done.

“It wasn’t a must-win game today but we wanted to get something out of it and to take full points is great.

“Chichester are a very physical team but they are a good football team as well and it is about matching that as well – the girls did that today.

“It probably wasn’t the prettiest game to watch but it was two teams slogging it out and trying their hardest to get something from it.”

Town handed a debut to new signing Natalie Haigh this afternoon, and Robertson went on to describe what qualities the former Yeovil Town Ladies captain will bring to his side.

“She was brilliant. She’s a great signing for us, she’s played at a good level, she’s a leader and all the girls look up to her,” Robertson added.

“She’s been around long enough to know her job and I had a good chat with her Thursday night and Friday night about what we were expecting from her today and we had a game-plan that we worked on during Thursday’s session.

“The girls implemented it brilliantly and her especially, she was probably one of the driving forces of that and it is nice to have somebody to boost the ranks.

“Other girls see that and that just makes it even more competitive for spaces in her squad.

“It is great to get a signing like that on board.”