Supermarine success over Plymouth, at last 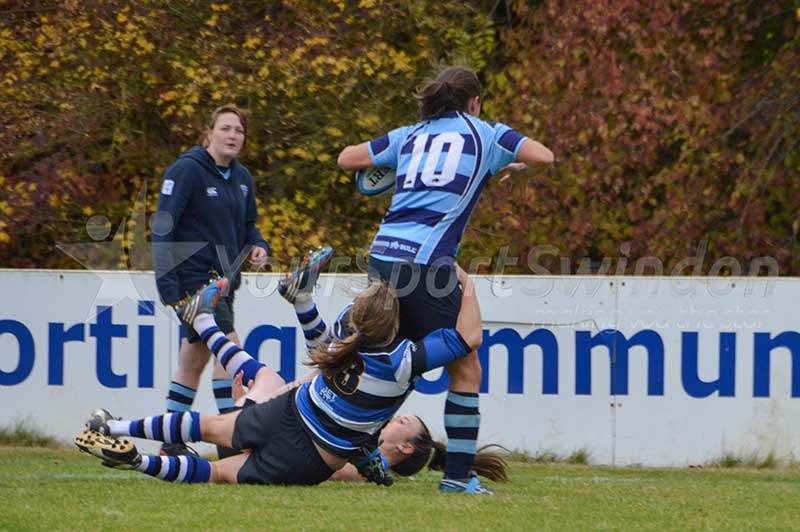 Supermarine Ladies continued their winning streak with a first win in over eight years against Plymouth Albion Ladies.

In what was a fantastic game for the spectators at Supermarine Rugby Club, both teams fought hard in this Women’s Championship South West Two encounter.

Penalties against both sides in the early stages added to the tension especially when Supermarine flanker Sam Gooch made some excellent steals from the opposition.

A relentless Plymouth attack enabled the visitors to score the first try of the game on 12 minutes which they also converted.

After a team huddle and a motivational talk from the coach, Supermarine picked themselves up and restarted at full-throttle, a pace which they kept up throughout the rest of the game.

Number eight Claire Chard made a break in the opposition’s defence as Supermarine won a scrum inside Plymouth’s 22 which saw scrum half Karen Adams cross the line for the home side’s first try of the day on 28 minutes.

Three minutes later Supermarine scored again with full back Nat Williams powering down the wing before passing to Lizzie Bacon who touched down.

Plymouth though bounced back, scoring an unconverted try on 37 minutes as they edged in front 12-10 at half-time.

Supermarine began the second half strongly, dominating the scrum throughout.

Stealing the ball from a Plymouth scrum, Supermarine went through numerous phases of play before Gooch touched down on 50 minutes.

A strong passage of play saw Supermarine break into the Plymouth 22 once again before a penalty to the visitors saw possession turned over.

Supermarine though soon turned the ball over again and their hard attacking game soon led to another try with Jenny Benton scoring beneath the posts on 61 minutes. Williams converted to extend the home side’s lead.

Williams then added Supermarine’s fifth try of the game on 70 minutes after the hosts once again stole possession from a Plymouth scrum.

The restart was then collected by Chard, who made an impressive 50-metre run to put the pressure straight back on the visitors’ defence.

Some excellent passages of play followed along with some strong scrums as Supermarine scored another try with flanker Emerald Fisk touching down and Williams converting.

Plymouth fought to the very end but Supermarine’s defence would not be breached again as they clinched a convincing 34-12 success.

Forward of the match went to flanker Sam Gooch and back of the match to scrum half Karen Adams while winger Ami Ford made an impressive debut for the club.

Supermarine’s next match is away at Teddington on the 21st February.